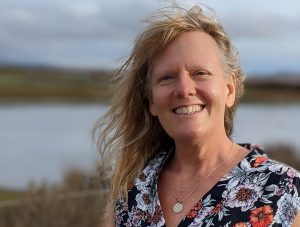 Janey Skinner is a fiction writer whose story “Carnivores” was selected by Stuart Dybek for publication in the anthology Best Small Fictions 2016. Her short stories have appeared in KYSO Flash, Litro UK, Writers Resist, Digging Through the Fat, the anthology Law & Disorder: Stories of Crime and Conflict, and a Shut Up and Write zine.  She is seeking representation for her first novel, Palomar, the story of two men seeking safety through opposite strategies — one a peace activist, one an armed combatant — whose clash with a powerful paramilitary leader puts both them and their village at risk . This novel draws on Janey’s experience working for human rights in the 1990’s in Colombia, as well as similar work she did in Mexico and Central America. Janey also writes nonfiction, including several chapters in the 2nd edition of Foundations for Community Health Workers (Jossey-Bass, 2016).  In 2016, she was an Artist-in-Residence at the Kimmel Harding Nelson Center for the Arts in Nebraska City, NE. She attended San Francisco’s juried LitCamp, in 2013 and 2014, the juried Napa Valley Writers Conference in 2011, 2017, and 2021, and Catamaran Writers Conference in 2019. She holds a Bachelor’s degree in Comparative Literature from Brown University and a Master’s in Public Health from U.C. Berkeley.  She teaches at City College of San Francisco.