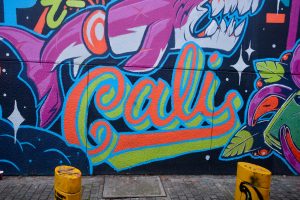 Since April 29, 2021, I have been watching from afar the enormous social uprising in Colombia that has taken over the streets, pushed the government to rescind certain taxes on the poor and the middle class, and given voice to a broad-based discontent with the status quo. I watch videos shot in Cali and Bogotá, as well as many smaller cities and towns, and my chest fills with that particular mixture of esperanza y angustia, hope and anguish, that I feel for Colombia. I spent several years accompanying activists in Colombia in the 1990’s; the experience broke my heart open and rearranged the pieces, leaving Colombia permanently embedded in my affections. In the protests now, I am struck by how many people from diverse backgrounds are involved. The young and the not-so-young, most of them working class, all races and sexual orientations, all genders, all finding a degree of freedom in their exuberant (and sometimes exhausted) protests. I see the joy in it — the dancing and the artwork, the passionate conversations, the proposals and the possibilities, and I am filled with hope.

At the same time, I am outraged and devastated to see the brutal repression of the ESMAD and other police forces of Colombia (often with US funding and training), the deployment of military tanks and soldiers, the armed civilians (likely paramilitaries) pointing guns at the protesters and too often firing. Amnesty International has condemned the state violence and police abuses. Human Rights Watch has confirmed 31 protesters killed, and at least 20 of those at the hands of the police. Many Colombian organizations report higher numbers of deaths, as well as hundreds of people missing, scores blinded by weapons aimed at the heads of protesters, dozens sexually assaulted, and many more thrown in prison for raising their voices. This level of repression is tragically familiar to me from my past experiences in Colombia.

Yet the broad participation in the movement is wonderfully strange. Literally every non-elite community in Colombia is represented in the protests today. The social change movements I witnessed in the 1990’s were mostly based in the countryside and led by campesinos, often knitted together by the strong ties within Black and indigenous communities or grounded in the union movements and neighborhood associations of left-leaning cities like Barrancabermeja. I never personally witnessed a mobilization like this one now, spanning the entire country, paralyzing commerce, seizing public gathering spaces for months on end. This movement is giving voice – no, is uplifting voices that were always there but seldom heard. Some people have compared it to the Paris Commune, or more humbly, to the Occupy movement of a decade ago.

For more years that I care to admit, I have been working on a novel, Palomar, that depicts a peace community in Colombia, a rural movement in resistance to the forced displacement of campesinos and a vehicle for a political voice for those communities. (The best known peace community is San Jose de Apartadó, a place I have had the privilege of visiting several times and a much larger effort than the one portrayed in my book.) My novel describes a great deal of repression, alongside the dignity and personal turmoil of the participants in that movement. In May, I shared a couple of chapters with a friend in Cali, a young Colombian professional who works as a translator. Her response really struck me. She said that, while my story takes place in the countryside and in another era, she had to keep putting down the chapters as she read it, because she felt like she was looking out her own window – the fear that people felt in the novel is exactly the same as the fear she was experiencing in Cali now. The novel’s portrayal of the unpredictability yet inevitability of the state-sponsored violence felt very current to her. The protestors killed in recent months didn’t plan to die on the day they died. They set out to add their voice to a growing chorus of protest. On many days, the protests were filled with joyful energy, while on other days, bullets and tear gas rained down. Yet the protests continue. This is the struggle for dignity that I sought to portray in Palomar, through my protagonist Dairo and his community.

I am touched that my book rang true for my friend in Cali. I also grieve that the same dynamics of power and repression are still present in Colombia. In this case, I would much rather that my book read like a memorial to a time long past.