Nonviolence and an Evolving Consciousness

Home/Uncategorized/Nonviolence and an Evolving Consciousness
Previous Next

Nonviolence and an Evolving Consciousness 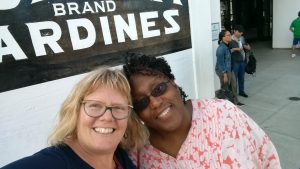 My friend Roxy Manning and I spend a lot of time talking about race, racism, power, and nonviolent struggle for social change.  We recently collaborated on an essay that touches on these themes.

Roxy is a psychologist and a trainer in Nonviolent Communication (NVC).  This method, developed originally by Marshall Rosenberg and expanded by other trainers, in particular those associated with BayNVC, is something that has been life-saving and life-changing for me personally.  It makes compassion a doable practice, towards oneself and others, with a radical commitment to equality of all people.  Recently, I have begun sharing NVC as a trainer myself, and I am running a monthly group that combines NVC and writing.

Nonviolent Communication has been criticized for a focus on personal growth and personal responsibility that can seem to omit or eclipse social responsibility and social justice.  I myself have been in situations where I had this criticism, where “empathy” just seemed too easy an answer, given the traumatic impacts of racism, sexism and other forms of social hierarchy.  Yet, the forms of persist resistance and creative nonviolence that I most admire (and sometimes participate in) do come from the heart.  “The master’s tools will never dismantle the master’s house,” as Audre Lorde so eloquently taught us.  Nonviolent communication is a different kind of tool.

Recently, Roxy wrote an important essay, making the distinction between the limitations of any particular trainer or group of trainers, and those of Nonviolent Communication as a philosophy and practice.  The essay is titled, “NVC — Changing Consciousness, Relationships and Systems.” I was happy to contribute to this article, helping Roxy communicate her analysis of how, among other things, the “who” in any movement shapes the direction of that movement. Expanding the circle of people involved can expand the consciousness and opportunities of the whole. To some extent, I see that happening in the NVC community — and I hope to see it develop further.

Since it was published on the BayNVC website and newsletter, this essay has generated a number of conversations and responses.  I was especially glad to receive an email from a white cis-gendered male trainer who had previously deflected questions about power and systems by saying things like, “There’s another training for that — check out the Nonviolent Leadership for Social Change training, for example.” In his email, he said that after reading Roxy’s article, he thought that was a cop-out.  Instead, he felt called to try to grapple with issues that may be uncomfortable, and not put that off on someone else.

In my life and in my fiction, I am often seeking to understand the juncture between individual awakenings and social change.  I hope this article also may be an invitation to any reader to dig into those junctures, to explore, to learn, to stretch.