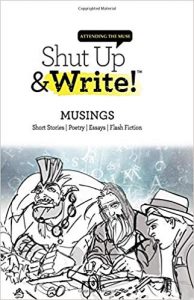 Back when I was in school, if I missed a due date it became almost impossible for me to write a paper, no matter how well-prepared I was.  Once I had a three-page outline with citations prepared for a five-page essay; yet once the paper was late, it seemed like it weighed a ton and I couldn’t lift it, no matter how much I told myself I ought to.  I never wrote that paper, nor spoke to the professor about it. My shame paralyzed me.

In the last two years, life has reared up and bit me like a snake. I have experienced one loss after another.  In this time of grief and confusion, somehow writing a blog post was a task I just kept postponing, the task gaining weight with each passing month until I could scarcely stand to see the ever-present reminder on my to-do list. Which is ridiculous when you consider that I love writing and that this blog has no pressures or deadlines other than the ones I myself impose.

New year, new determination.  I am writing again. I am back at the “Shut Up and Write” group that I attend, and I plan to be here at least twice a month.  I have the goal of sending out my novel this year, ready or not, to try to find an agent and a publisher. More than anything, though, I want to re-establish good writing habits and revive my sense of belonging to a writing community. Nothing is more essential to me as a writer.

Since I last posted to this blog, I published a prose poem in the Shut Up and Write Zine, and I read at the zine’s launch in San Francisco.  I have gotten a lot from the Shut Up and Write groups I have attended, so it was meaningful to give back to the community by contributing to the first issue of the zine – and an honor to have my piece appear in it.  The piece I published there began as a sound poem drafted in a Ripe Fruit workshop with Leslie Kirk Campbell, then became a passage in my novel-in-progress, then taken out of the novel and revised again.  I may revisit it again in the future – there is something about the rhythms of the language that I love yet haven’t quite gotten on the page the way I hear it in my head.  The initial inspiration for the piece, as for much of my writing, arose from memories of my time in Colombia in the 1990’s, supporting human rights defenders. Here is an excerpt from the prose poem as published in the zine, titled “On the Road She Rode”:

First trip to the village on the chiva, the clack bump clack of the wheels through the sundried mud ruts, Jesus on the end of the gearshift glinting like the green eyes of the driver who knows he’s beautiful and married.  The grinding of gears on the uphill and an old woman’s fingers on Rocio’s arm, touching fair city skin and asking, “Hermanita, adónde va?” Long brown fingers fishing out a crab’s leg from coconut milk to pass forward to the monita sitting next to the driver, “Mona, ¿adónde va? ¿Le gusta el cangrejo?  Cómo no le va a gustar.”

Crabs legs, cangrejo, fingers crowding in on what, what, a shiver, a moment. Bumping up against the questions in a young woman’s mind. A chorus of crows caw caw overhead, near the chiva but not too near. Green eyes on a copper face, offering up questions about saints and martyrs, anything to keep her talking, her blond hair nodding. It’s only ten slow miles from Turbo but it’s a world away. Only four hundred miles from Bogotá but it’s a world away.  It’s only ten or twelve or sixty miles from the front, from the Aracatazo where the massacre happened or the site of the carrobomba in Medellín or the site of the bici-bomba in Cartagena or the site of the mula-bomba in Barranquilla or the training ground of the paracos of Puerto Boyacá. It’s only a town in Colombia and it’s a world away.

If you’d like to read more, check out the zine!

The only other real writing news I have to report here is that I attended the Catamaran Writing Conference 2019, sponsored by the beautiful Catamaran Literary Reader, a literary journal I have continued to enjoy for its striking combination of poetry, fiction, nonfiction and visual art. I had the thrill of studying with Peter Ho Davies who is really a remarkable teacher, as well as a tremendous writer.  He knew how to weave elements of craft into anecdotes and examples that kept us engaged emotionally as well as intellectually.  He is also very kind, blowing on the embers of each of our pieces of writing to help them ignite new flames. I workshopped a story that combines my own family history with events I witnessed in Guatemala in the late 1980’s – a story I hope to soon finish revising and send out for publication.

May this first post of 2020 be a step toward a more disciplined writing practice and a growing sense of purpose in my life as a writer.  Another teacher of mine, Joshua Mohr, has recommended writing an annual mission statement or manifesto, crystalizing one’s intentions as a writer for the year ahead.  I’ll post mine in February. Give that a try yourself and let me how it works out for you, in the comments space below!